Tuesday, 15-04-1997
I hope the festive celebration will be a joint meeting with Instituto Cervantes England and Wales at the Spanish Embassy in London in order to discuss joint future plans called Cervantes Project. Scorpio: 'If someone yesterday unexpectedly made an appeal to your hospitality today you have to deal with the consecuences. By organizing better your government you will be less vulnerable. Pay bill properly and hide credit cards. Last Sunday a lady in de Holy Land Foundation did an appeal to me to help her with the translation from English into Spanish of a part of a wedding ceremony between her son and his partner from the Dominican Republic on the 9th of May. Yesterday evening she called that it would not be necessary however. The Dominican family wants to do that themselves of course. About the organization of my government I will refer to the Government Game of the announcement in NRC last Friday and the remark of the paying of the bill reminds me that this week I received the amount of Dfl. 309,50 from Het Stadhouderlijk Hof. I will translate the text of De inschrijvingen voor het Government Game starten weer: 'The enrollments for the Government Game start again. During the Government Game 1997 you can decide what you would do when you would have the power. And you will see the consecuences directly! The Government Game starts this year already for the fourth time. This simulation game offers you the ultimate chance to test your governmental and management qualities on the superior level. Preceding the competition you will form a cabinet with three persons and you divide four ministers posts. Consequently you will be confronted in four rounds (every round represents a cabinet's year) with taking governmental decisions. Your decisions will be checked by the Government Game Coalition Agreement, which is a reflection of the actual Purple coalition agreement. The cabinet that approaches the objectives of the coalition agreement the most close and has produced the highest civil satisfaction, receives the title of honour Best Shadow Cabinet 1997. To this title an attractive first prize is connected. The Government Game 1997 is not only pleasant and exciting; it gives you an excellent insight in how political decisions come about. Do you want to know more about the Government Game 1997, then take up contact with Jeffrey Rijkhoff, etc.' Last night I sent him a fax with the message. 'With great pleasure I could observe myself in your announcement 'De inschrijvingen voor het Government Game starten weer' in the NRC of last Friday on page 40. I consider it an extremely pleasant and creative invention to put me back on the functionning level that I had to leave some years ago as the consecuence of too strong resistance from the outside and too little support from our society. It is right indeed that you portrayed me as leader of purple. 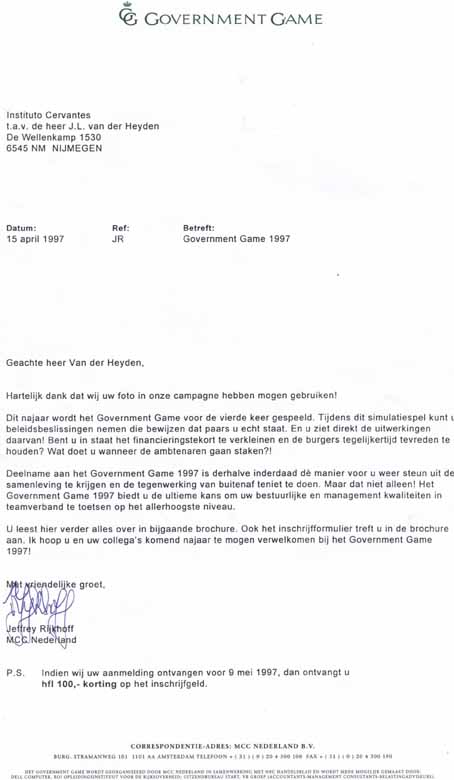 Purple is the home colour of the Instituto Cervantes Benelux, for which I meanwhile obtained the definitive trade rights and the purple of the heather matches very well with my name. My plans have to be realized within a very short time and I can use a good shadow cabinet very well. Perhaps it makes sense when I participate in your Government Game. Therefore I like to form with great pleasure a shadow cabinet with three persons in order to give shape to the policy of the Instituto Cervantes Netherlands, Belgium, Luxemburg, England and Wales. I am also interested in the attractive first prize. 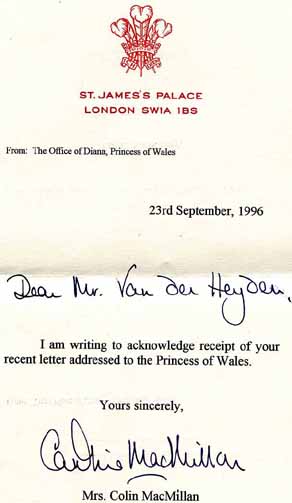 I should like to receive the dates about the candidates for my three ministers posts. Perhaps they will form the basis of a new European Government.' I called Mr Rijkhoff. It seems to me very interesting. He send me the information. So I can study it in England. I think I might prefer a place in the board of recommendation, because they used my image already and you know how I think about unauthorized using of photographs. I consider this action however as a friendly gesture to release me from my actual cage. I also took a new decision to divide better my energy. From now on I will go jogging and walking every morning after breakfast. In London I will do it in Hyde Park and Kensington Gardens around the Serpentine from 10.30 till 12 a clock. Everyday I will take a break at Peter Pan of course. Except the 22nd. Then I have to see the Changing of the Guard at BUCKINGHAM PALACE. I hope that evening there will also be a concert of the Fifth Symphony of Beethoven. I also intend to visit the Serpentine Gallery. Had a nice walk. Helicopter survey as usual. I received the message that the Eurostar has been booked for Thursday. The adress of Hotel Manor Court is 33-35, Courtfield Gardens, SW5 London.

1. You
2. The office in 1 Serjeants' Inn, Fleet Street, London EC4Y 1LL
3. The head of the Spanish department of ETON COLLEGE
4. The general manager of Henley Management College
5. The Lord Mayor of Stratford-upon-Avon

The most important change in my plan concerns the financial paragraph and a new actionplan:

The 22nd of November 1996 I decided to the foundation of the following companies: 1. Instituto Cervantes Holding Ltd 2. Cervantes Education & Training B.V. 3. Cervantes Recruitment & Selection B.V. 4. Cervantes Management & Organization B.V. 5. Cervantes Business Consultancy B.V. 6. Cervantes Travels B.V. 7. Cervantes Translation Services B.V. 8. Cervantes Interpret Services B.V. 9. Cervantes Public Relations B.V. 10. Cervantes Communication Services B.V. As first activity Cervantes Recruitment & Selection has to be started at Schiphol Amsterdam Airport in the form of an office for recruitment and selection of personal in favour of companies directed to the Spanish speaking market. The need of capital is indicated in Projectprofiel 40244 of the 'Nederlandse Beurs voor Investeringen in Bedrijven en Ondernemingen (nebib)' of 7 April 1997. To establish the main office in Stratford on the first place a complete Management Information System is needed, an office and a small staff and of course a business angel as investor.

The English horoscope told me that Silence has been Golden (once I sent a fax with that message to Het Stadhouderlijk Hof), but that in the coming few weeks that will be over and there will be a great necessity of discussion. I agree.