Friday, 18-07-1997
This afternoon I was visited by a security man. I told him about the situation at the moment. As a security officer it's a duty to keep silent. I was called by Rachel with the request if I will come to Amsterdam tomorrow. I also look at the photographs that I sent you today. The coat of arms with the sheep and the English flag is of Gaspar. 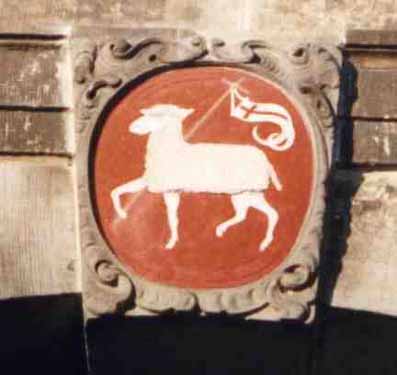 During the war against Spain he lived some time in England (Norwich). That is our historical relationship. The red en yellow bus of Dianetics is the link between you and me. The four red sunflowers represent the support of the Royal Houses of the Netherlands, Belgium, Luxemburg and Spain to our marriage. The red and purple umbrellas in Het Stadhouderlijk Hof seem evident to me. The throne of the Family Nassau will have a very special significance as well as my orange sweatshirt with the lettering

We have to go there next autumn Di. They will be astonished. This situation reminded me also of the problems in Northern Ireland. It has been wise of the orangist people to cancel their proposed marches. That would have been an insult to our Royal Family. We don't like intolerance. On the contrary. Every person has to be respected and We have to build up a new world where everyone can live in peace together. I noticed that little Harry has taken over my idea to photograph photographers. Bravo! It's a very useful weapon that I use since the Karaoke show in NOORDWIJK last year at this time. That was a very good hint. That way we can conquer the world.