Wednesday, 13-08-1997
'If you give me a job or partnership in England I can sell my appartment to Mr Henk Maas, who will visit me next Friday in order to discuss the possibilities to start up Cervantes Education and Training. I think I will ask 199.000 guilders for the appartment. That is the best advice that you can get today, especially regarding the article in De Telegraaf (T9).

I translate some lines:

'The British royal family is losing rapidly the support and confidence of the people. For the first time less than the half of the adults of the country thinks that the land would be worse off without monarchy, while this percentage still amounted 70 three years ago. One of the three Britains thinks it even better for Great Britain when the royal house would disappear. ...According to the newspaper The Guardian the popularity of the royal family has reached a tragic low point.... Specificly the younger people up to 25 years must have nothing to do with the moneywasting institute that every time again succeeds in getting into the picture with new riods and scandals. The most recent affair, the romance between princess Diana and the playboy Dodi al-Fayed, the 41-years old son of the Egyptian boss of the super expensive Harrods, thus does not seem very beneficial to the position of the royal house. Diana is since her divorce from crown prince Charles not an official member of the royal family anymore and still 'only' the mother of the future king William, her now 15-years old son. Nevertheless the photographs of the embracing Do and Di on the front pages of the international press apparently have not promoted the reputation of monarchy.'

This is a very serious situation Dear Diana. 'De Telegraaf' is a very powerful magazine that I personally used to get rid of all criminals in this country and far abroad. I can also advise you one thing and I mean this sincerely with all of my heart. You can get the love of your people back by stating:

'There is a secret plan to solve the problem of our monarchy. Therefore I needed the support of Mr Al Fayed. I also needed a secret place to discuss the plans. Mr Al Fayed was so kind and gentle to promise me his personal support that I expressed him my sincere gratitude the way it appeared in the press.'

This is the only solution to solve your problem, Diana. And I can help you definitively if you offer me a job as your personal advisor or secretary. All I need is an office and appartment at KP. I have a lot of experience in solving this sort of problems. In 1989 for example de Baak had a very serious and similar structural problem. We solved that problem for the complete hundred percent and now it's a flowering business. I am ready to come and stay in London. All my tasks in the Benelux can be delegated now. Herewith you find your photographs with the boys that surrounded me in Paris since I posted my last postcard in Regent Street. That must have a very deep significance.

Next Sunday I hope to find a fax message in Windsor Holiday Inn from KP with the text:

'Dear Mr Van der Heyden. We offer you a job'.

Just Do it, My Dear Lady. It will be the very end of your problems and the guarantee that your son will be on the throne in the future. I worked a year on this case, which I consider as a preparative necessity. Now I see the problem very clear and also the way to solve it together. Till next week. YOURS SINCERELY. JOHN VAN DER HEYDEN. Enclosed: 'Fransen fleuren prinses Diana op' (De Telegraaf 11-08-1997). Added (14.35) Letter Procedure 97 / 2152 BELEI R08 II G32. 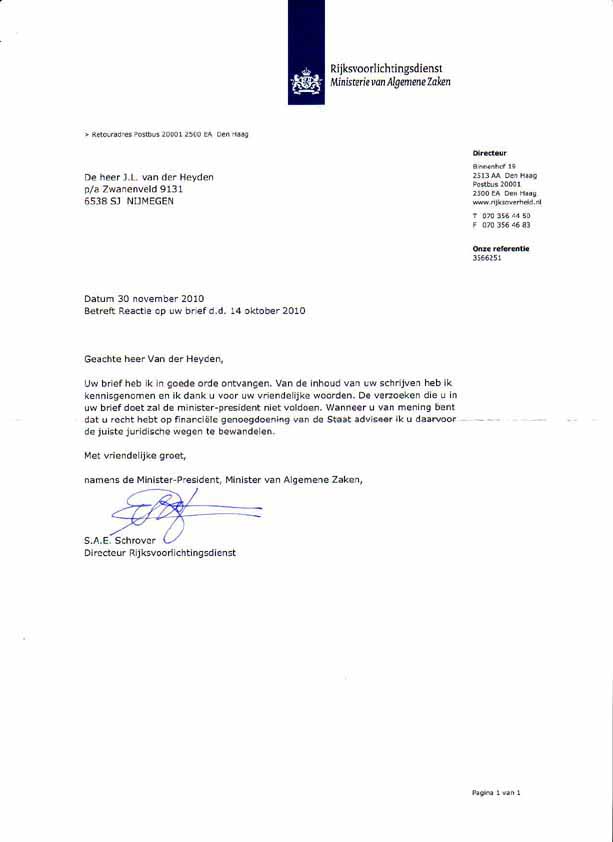