Thursday. 24-07-1997
I read that from 2 till 4 October in The Hague a world congress will be held about Family Business, organized by 'Stichting Familiebedrijven Nederland (SFBN)', the Dutch branche of Family Business Network (Article enclosed). We have to start as soon as possible. Certainly now that all the stock exchanges are rising spectacularly. I give you the translation of the letter that I sent to Mr Blankert yesterday:

Dear Mr Blankert,
In addition to my letters of 14 November 1996, 5 December 1996 and 30 January 1997 I would like to inform you about the developments after. After having received the Certificate of Incorporation of Instituto Cervantes Limited England and Wales and my appointment as Director of this Company I delegated my authorities in the United Kingdom in April of this year to the Princess of Wales. Meanwhile I proposed her to make a family company of it and to contract matrimony with her on 28 September. As she is now the boss over two countries (England and Wales) and I over three (Netherlands, Belgium and Luxemburg) formally seen I am her boss now and it is obviously a question of honour to be able to finance the activities around this marriage. Therefore I would appreciate if you could bring me into contact with some companies who are prepared to stand surety for the costs around this historical event, if she would agree with it. Which I expect. Concerning the developments I report periodically to my old-colleague Liesbeth Halbertsma, very known to you. I have no objections if you exchange ideas about this with her, or with Harry Starren. I hope to count on your indispensable support and to receive a reaction from you within a short term. etc. etc.'

I'm not sure if Andrew Cunanan has been arrested already. This morning I had a short conversation with Professor Knol. As a result I sent him the following fax message: 'Dear Mr Knol, Thank you for the short conversation of this morning as a consecuence of my fax message of the day before yesterday. I think that concerning the exploitation of Company 2 'Cervantes Education & Training' indeed the company 'Reed Elsevier' will be the most eligible. I have also the opinion that they have to invest some millions in the company. I have no objections if they want to take over the complete management against the payment of a fixed fee for the use of the name and a part of the profit to the Holding, that I wish to convert into a Dutch-British family company. Elsevier disposes also of the needed infrastructure to serve a very good client of me: a very huge company that disposes of 5% of her turnover for education and training. I already agreed with this company that 'Cervantes Education & Training' will execute the job oriented education of the on the Spanish speaking market oriented personnal. Regarding the spectacular developments on the stock markets it is now THE moment to invest in my company. I am convinced that for a company like Elsevier it will be extremely interesting to bring their on the Spanish speaking market oriented activities under 'Cervantes label'. Doing so they will cover the complete market share in education and training oriented towards the Spanish speaking market. So a monopoly position. In case you have contacts with them I would appreciate if you would report this to them. For me goes although: 'Who comes first, grinds first'. Elsevier is a big name, but has not yet the worldwide reputation that I have with my 'Instituto'. With kind regards, etc etc.' To be clear: the indicated client is Amsterdam Airport Schiphol. At the Vreeburg I met Jolanda in the Dianetics Bus. 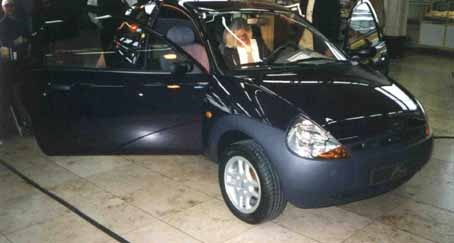 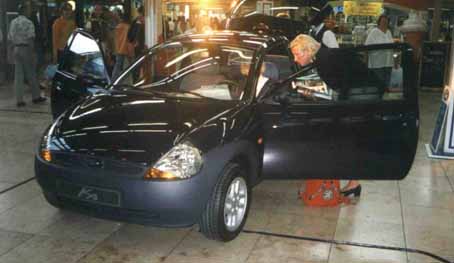 At Hoog Catharijne I delivered a letter to the Promotion Team of Ford Ka with the text: 'Promotion Team Ford Ka, Hoog Catharijne, Beating Heart of the Netherlands. Date: 24 July 1997. Concerns: Test-drive. Dear Promotion Team. I would like to make a test-drive with your lovely little Purple car. From Utrecht to Kensington. With kind regards. Yours sincerely, etc. Enclosed: 'Paars vol lof over Kok en Van Mierlo'. P.S. This signature is worth more than your little car.' They have to invent something creative.