Saturday, 2-08-1997
Again a call from the security man. He had already an appointment today. I invited him for next Tuesday because he was recommended by my old friend and colleague from the Institute of English Studies. At home there may rise a struggle for power. I can imagine since I received the letter from Mr G.P. Mitchell of Her Majesty's Tax Collector. But it will not be a struggle for power, only an inner realization of responsibilities for the past and for the future. Besides: Logic is the answer for every problem. I read page 11 of The Sun. I am so happy for you that you have your children back and can go out with them from your own home and to your own sister. They are wonderful children. The article also proves that it must be possible to visit the theatre here in the same way our royal friends do. I also read on page 13: 'A former leading churchman reckons Prince Charles should marry his mistress Camilla Parker Bowles in France. Brian Brindley, ex-member of the Church of England's General Synod said the Prince ought to hop across the Channel and tie the knot in a civil ceremony. The 64-year-old author - writing in the Church Times - reckons his plan would avoid constitutional problems over Camilla's future role. He added: "If Charles has not asked for the Queen's consent the marriage will not be lawful in Britain, "So his wife will not acquire any Royal rank or status - she couldn't be Queen". I am prepared to go back to St. Mary's Church in Warwick again. In my mind I hop across the North Sea now. I am over-cautious indeed and concerning my disappointment I herewith translate the letter to Mr Nijpels: 'President World Nature Fund, Mr Ed Nijpels, Boulevard 12, 3707 BM ZEIST. Date: 1 August 1997. Concerns: Your Surprise Package. Dear Mr Nijpels, For the second time I received Your introduction package of 10 July 1997 with the heading 'Dear Mrs, Mr Van der Heyden/inst. Cervantes Benelux'. In the meantime You do know that I am not a woman Mister Nijpels. Enclosed I request You to find a portrait of mine amongst my supporters.

I received Your first package already in the times that I still lived in Nijmegen in the Wellenkamp (wellen = golven = waves) and amongst others our Prime Minister has started the wave during the budget debates. Shortly before I had taken place on the tribune on the Korte Voorhout, which for Mr Rosenmöller has been occasion for some nice references during the debate. Mr BOLKESTEIN has had some little problems with that and has apparently retired from the Government Game Competition afterwards. That way he has not made it easy for himself on Cyprus some days later. Meanwhile I moved my hunting ground to the United Kingdom as you see and hope to remain there in due course for the rest of my life. But then I still need some good managers and it appeared that in the past I could recruit them exclusively in criminal circles. I also invested about one hundred thousand guilders in private in the development of the organization and have not seen yet a sole contribution on the account of the Foundation Cervantes Benelux. Perhaps you still will have a nice idea and You will come by on the Neude for a little game of Monopoly. And, dear Ed, just call me John. With kind regards, INSTITUTO CERVANTES, Netherlands, Belgium, Luxemburg, England and Wales, JOHANNES VAN DER HEYDEN, Manager Benelux. Enclosed: Purple full of love about Kok and Van Mierlo P.S. The giro account number of the Foundation Cervantes Benelux is 4729266'. I am learning a lot of new English vocabulary and that I also don't need Pitman anymore. And besides it's really nice to look in the sun, but I do think I need some more sophisticated literature in the future. 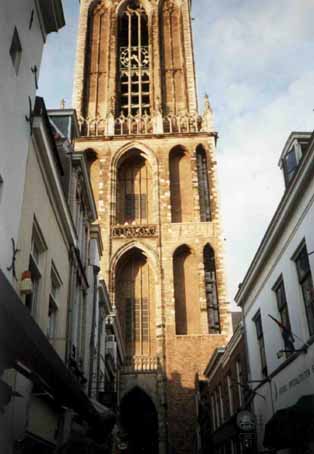 Back from a concert from the Dom Tower with Ary Abbenes. The orchestra was collecting for a journey to England, a man with a yellow cap. A boy with a red cap was shouting from the tower to the public questionning 'Do you want to hear another song'. 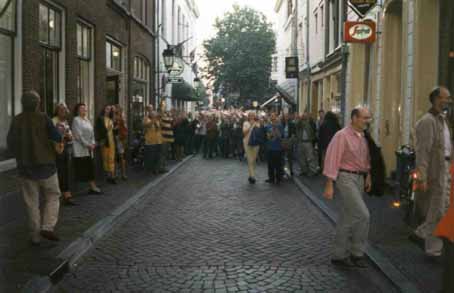 Then police appeared. I wore my Earls Court Gym sweatshirt and told them to get away, because they disturbed the manifestation. Their boss, Mr JAN WIARDA, owes me his knighthood. He observed me very well last Prince's Day at the Korte Voorhout. Then I met some people from South Africa. It's nice to hear them say 'Ek versta dat'. It reminds me of Zahn Flower and I would really like to visit that country too. I hope We can amuse Ourselves there. Just like I do here! Oh Yes. I wrote Peter a letter as well and posted it this evening. 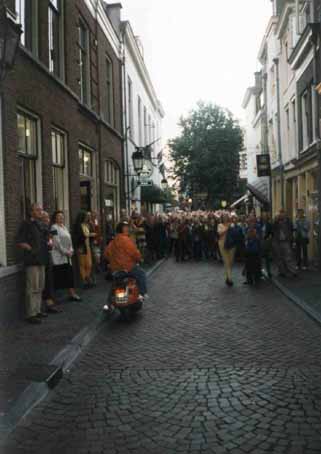 You know the contents already. It concerned some yellow flowers on a purple background and a priest in Warwick with the name Brindley. From the roof of my house I see a cat walking. I noticed that Charles' favourite meal is smoked salmon, but that his chef has left Highgrove. It reminds me that Mr Gerrit Zalm (zalm = salmon) still owes me 80 million guilders with interest. It must be possible to raise that money for the foundation. Mr BOLKESTEIN will co-operate without any doubt because on Cyprus he had to flee from the press and he was offered a plate of smoked salmon, but no one appeared on his meeting. Also our Minister of Economic Affairs (Mr Hans Wijers) is in debt with me, because once he proposed to found a 'purple party', but he opened the office of the competitor on the Domplein in the presence of my good old friend José María, without my consent. Wouldn't you like to meet his wife, Ana Botella? She is very known at Christie's. It's a pity that they stole my purple pen. But life goes on and We will certainly have another occasion to let the sunflowers flourish.