Saturday, 28-06-1997
I will see if I write a letter to Peter and visit The Loo this weekend. This morning I wrote a letter to Yellow Peter with the following story. 'Dear Peter, After all cryptical letters this time a clear story from friend to friend. As you see in the meantime I have landed in Utrecht - 'for the time being' - and consider myself very happy by having found this appartment above 't Neutje. It is centrally situated and not far from the Domplein, where my future Spanish collaboration partner is established. Formally they are illegal here, but I work out of a Win-Win Strategy and have good hope that this will lead to a flowering collaboration. Meanwhile I can count on the support of the three governmental leaders from the Netherlands, Spain and the United Kingdom and of course of the complete Dutch Government as you see on enclosed photocopy.

Still this week I received a sympathetic letter from the Foreign & Commonwealth Office in London on behalf of the Prime Minister. 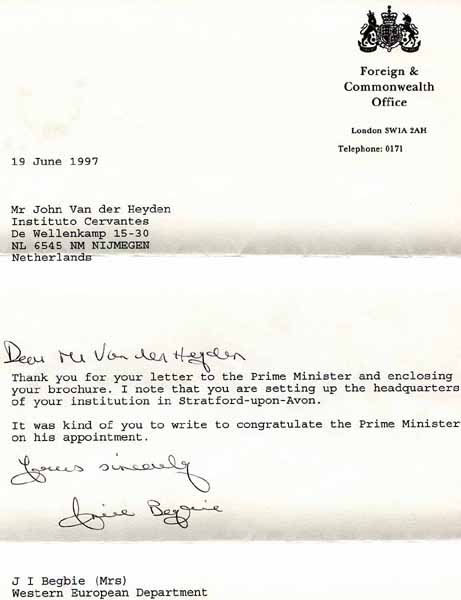 Although I was advised on last 23 April at ETON COLLEGE 'to stay away from the Royal Palaces' in the meantime I am welcome again 'in and around KP' and make another trip to England from 17 till 21 August. An organized group journey this time to the Royal Gardens. I am really looking forward to it. I am not only in love with a car anymore, but this time with a 'human being'. Fortunately. And I can not avoid the impression that that is mutual in view of the beautiful purple and red dress that I was allowed to descry yesterday on the front page of The Mirror. My Lady has meanwhile become an important part of my life and I mean this seriously. I love her, although I have to be satisfied with a photograph at the moment. But that does not matter. There is a feeling of solidarity and at ETON COLLEGE and KP I am very known meanwhile. I established that during my last journey. Meanwhile I proposed to her for a marriage on next 28 September. In writing. 'According to the Rules'. Exactly today in three months and she receives every week a letter from me. This has the approval of her life guard. Also now a birthday present is waiting for her. Tuesday she has her birthday. To me it is quite an experience to go through this after I saw her in the eyes for the first time. At that time she still found herself in a very difficult situation and I had compassion with her. She has gone through that very well and I have the greatest respect for her. She is now portrayed on page 14 of Vanity Fair, with a lookalike of mine.

Of our good friend Herman I have received a lot of support during the last time. He has revealed himself as a very good old friend. I think this can be put on paper this time, because I will not hesitate in mentionning people in a letter who personally mean a lot to me. That also considers you and my good colleagues of de Baak, where I have been a guest last weekend on occasion of the Congress The New Economy. After a five year's long period of cooling down I also saw Elizabeth for a moment. Just a second: a handshake, a pat on the back and a look of understanding. I am happy with that. I don't need more, Peter. But considering my Number One on the other side. That one I have hidden in my heart and in the meantime I have appointed her Head of the Organization with the headquarters in Stratford-upon-Avon, to which I undoubtedly want to return when the company has been made operational in the Benelux. That is the message that I received in England, but my new companionship has the supreme priority at this moment and the organization around it. I notice that many parties behind the screens are working for me, such as the Editor of NRC Handelsblad at Paleisstraat 1 in Amsterdam.

This week I received of them a nice package with two samples of Het Parool with the beautiful photograph of My Lady, as I also found it in the British Tourist Office in Stratford, that she ever has opened personally.

Also in Royal Leamington Spa everything has been arranged already. That means that we have to go hard to work for The Wedding on 28 September. Meantime I got in contact in Huis ter Duin with the company bo-rent Successful Party from Hoorn. I ask you - as friend - to grant your collaboration on this. How I must pay everything I don't know, but I may presume that My Lady is prepared to finance part of the activities if she will accept my proposal. I remain in a hopefull mood because I noticed also in England that the reactions on my ideas are very sympathetic and I have received the message that I can expect an offical letter from KP. Besides I announced her in the meantime as Head of the organization at HM Tax Collector and the legal framework is waterproof. Within this framework she will most probably fulfill the position of 'First President of the European Cervantes Foundation' in order to develop in here charity activities. This initiative is particularly supported in Belgium by a far member of the family. I want to request you to visit me as soon as possible to talk things over. It's nice to be here on the Neude and it is not far from home. With friendly regards. Your Friend, John."

Then I saw you in your red dress on the front page of Party with the text 'I don't come on wooden shoes' in yellow letters. Of course I don't know what is true between Emily and Willem-Alexander. All I know is that she worked for the same employer as the daughter of Mrs Van Zanten, whom I met last week and who told me that we would meet each other much more in the future. What also counts to me is that you express your willingness to come to our country 'for the first time', Dear Lady (that I) Love. I will go to the Loo tomorrow to order an option for a reservation on 28 September! Someone has to take the initiative. Is not it?: By the way. I am happy that you read so much about the Netherlands already. Now it's my turn to know something more about your country. But

We Have to Build the Bridge Together.

I should like to have my hair cut just like Mario Testino. Then you don't have to go on with a surrogate. One person - in Stratford - told me once 'You're mad'. I replied 'Some people may think so, but I am not'. It was the boy from Monaco. I do enjoy life - YES - that's true, but I am only mad about you. May I? A certain Mr Whitaker does not believe in 'IF' anymore. But I do Love.

Back from Casa Sánchez. There I had una "Zarzuela" and "Red Wine" and had a good conversation with Mrs en Mr Frowein from De Bilt. She knows NOORDWIJK very well and was very understandable. I Love You so much. Please accept these Red and Yellow Roses. Please come and be happy. I am in for a cruise or something like that. Before I Di. 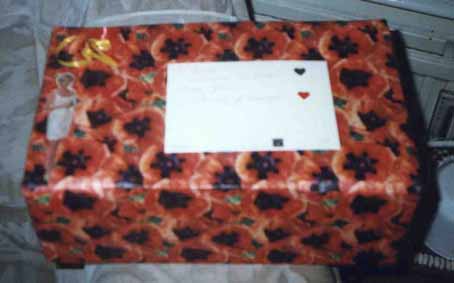