Saturday, 5-04-97
I start with an overlook of yesterday. First I visited the hairdresser and told her that I intend to visit you the 21st of April at KENSINGTON PALACE. She told me 'Maybe She will marry you'. My reply was: 'If so, I would do it at once'. After having visited the hairdresser I took the train to 's-Hertogenbosch. At 15.56 the train stopped in Wijchen before a poster with a blond lady in a purple dress and the message 'I'll survive'. On the railway station in 's-Hertogenbosch I read in the horoscope of The Sun on page 28 'No one will put any objections to your plans, meaning you can implement certain changes at home or at work with a minimum of fuss. What pleases you most is that one particular person has a ..... to help you today. Make the most of it". In the centre of the town they played 'It's good to touch the green, green grass of home' and then I realized 'It's time to go, it's time to leave' so many evenings already I had been listening to Martin Guerre and the song 'Please, tell me to go, tell me to leave' and I know this is the moment that I have to say goodbye to the Netherlands. I went to 'Silva Ducis' where I had been the last 22nd of March. There I met a nice boy. He studied MBA in Barcelona and so I told him my story. He invited me to come to visit him to make a trip on his boat in Pals into the Mediterranean. I promised him to come after having arranged everything in England. Colette, to whom I spoke last time as well, offered me a drink. I visited the Raadskelder with De Olde Regtbank, the Old Table of Justice and the Prince's Room. I told the innkeeper the story of the original medieval Table of Justice in Heyden in Westfalia. I also told him to come back next time with a real Princess. 20.00 Falstaff. Here I spoke about the plays of William Shakespeare. Silva Ducis. Town inn 't Pumpke' with a painting of 'Angels from heaven'. Then I went back to Nijmegen. In Oz the train stopped before a poster with the lettering 'The new Kiss'. At Applebee's I had a conversation with two British gentlemen from Yorkshire (yellow T-shirt and lettering 'Russel's') and Hampshire (Plymouth). It was a rather disagreeable conversation as a matter of fact after I had expressed them my embarrasment about the break-in at KENSINGTON PALACE and I had shown them your photograph. The man from Yorkshire was about to punch me in the face. I told him however that I am an honourable man. The situation obliged me to withdraw and to sit down at a table under the poster of The Wizard of Oz next to a broom on the wall that reminds me of Operation Heather Brooms. 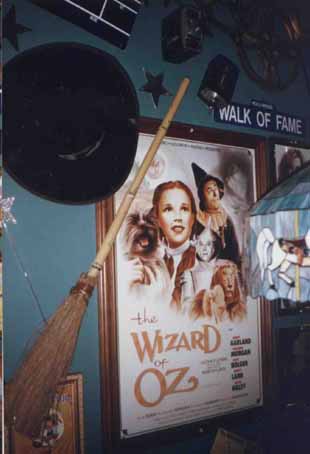 I took a glass of Imperator and offered the same drink to the English 'gentlemen'. They refused but preferred a glass of 'Brewtus'. I granted their request, because 'Brutus was an honourable man' (Shakespeare: Julius Caesar). Now I am passing to the Dutch horoscope of today. You have to check your fax and the line towards mine on all security aspects. I can communicate already by having requested the Head Master of ETON COLLEGE to be my intermediate. But a direct line would be more appropriate. Of course the important project is the Cervantes Project. You are my inspiration and I hope I am yours. I only have to let you wait until the 21st of April. So that is 16 days to go from now. I received enclosed letter of the Ministry of Justice as a reaction on my letter of 25 March 1997.

I give you the translation of this letter: